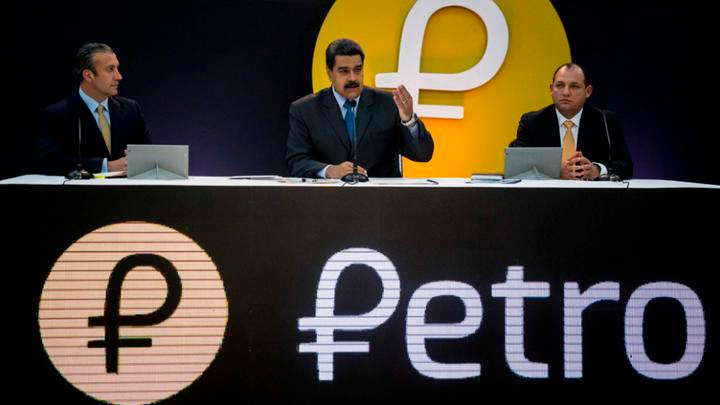 Venezuelan President Nicolas Maduro said the Petro raised US$735 million on its first day of its pre-sale. (EFE)

Puebla, Mexico, February 23, 2018 (venezuelanalysis.com) – Venezuelan President Nicolas Maduro announced this week the launch of a second cryptocurrency, after describing the Petro pre-sale as a success.
“Today, a cryptocurrency is being born that can take on Superman,” Maduro said Wednesday night, after he announced plans to found the Petro Oro (Petro Gold).
“Next week I’m going to launch the Petro Gold, backed by gold, which is even more powerful, to strengthen the Petro”.
It wasn’t clear if Maduro was referring to the central bank’s roughly US$7 billion in gold reserves, or the country’s unmined natural reserves,however. He also suggested it may also be backed by other precious metals.
“We Venezuelans are indomitable,” he said, adding that he considers the Petro Oro to be a “big solution” to “big problems”.
According to Maduro, the Petro Oro will build on what he said has been the success of the Petro.
On Tuesday, he said the Petro had raised US$735 million on its first day of its pre-sale. If accurate, that would make the sale one of the most successful of its kind in history. Excluding the Petro, the world record for an initial coin offering is held by Filecoin, which raised US$257 million during its initial sale in September, 2017. One of the world’s most popular cryptocurrencies, Ethereum, raised the equivalent of US$2.3 million during its first day of pre-sale.
Venezuela’s government is yet to publicly release further details of the sale, though Maduro has praised the Petro as a key weapon in his fight against what he describes as an “economic war” being led by the United States.
Maduro said the Petro will allow Venezuelans “to make financial transactions and overcome the (US and EU) financial blockade”.
“We have taken a giant step into the 21st Century … We are on the world’s technological vanguard,” he said.
Venezuela is currently facing a tightening noose of US sanctions, which Maduro has warned are hurting ordinary people. The US Treasury Department has warned trading in Venezuelan cryptocurrencies like the Petro could violate sanctions.