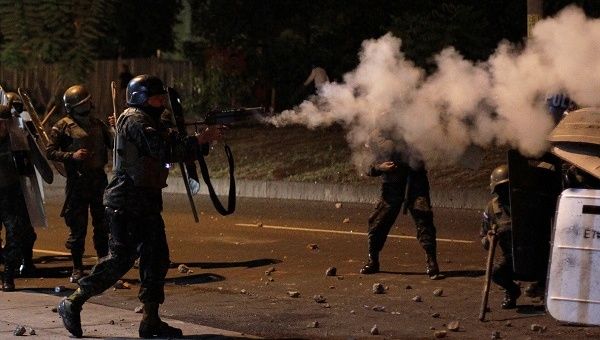 Mobilizations across the country have been organized for three days starting from dawn Wednesday, to demonstrate the opposition’s rejection of the disputed election results.

Mobilizations across the country have been organized for three days starting from dawn on Wednesday, to demonstrate the opposition’s rejection of the results and condemnation of violence by state security forces, who have so far killed at least 26 protesters.

The Opposition Alliance announced the call “in the face of the vile murders, the physical aggression, persecution and attacks carried out by the military, paramilitaries and police against the people who exercise their universal right to peaceful protest in defense of their vote.”

At the same time, Hernandez posted a message on Twitter thanking his supporters for their loyalty: “Thank you for your calls and messages of congratulations on our electoral triumph, we will continue to work ceaselessly towards the construction of the new Honduras.”

Former president Manuel Zelaya, who was removed in a U.S.-backed coup in 2009 and has been a key actor in both supporting Opposition Alliance candidate Salvador Nasralla, Tweeted: “We call for you tomorrow, 3pm at the Obelisk facing the headquarters of the armed forces, to strongly protest the murders, assaults and violations of human rights.”

On Thursday, the Opposition Alliance is due to lead a protest march to the United States embassy, whose government has officially recognized the victory of Hernandez. On Friday at 6pm (local time), the alliance had asked the Honduran people to mobilize on all of the country’s public roads.

Nasralla, who lost by less than two percentage points after a prolonged delay in announcing the results, traveled to Washington, D.C. on Monday to meet with Secretary General of the Organization of American States Luis Almagro, who has called for a fresh election.

Almagro said Sunday that the election was plagued with irregularities and should be redone to meet the international standards befitting of a democracy.

Aside from the fact that it took almost a month for the Supreme Electoral Tribunal (TSE) to announce the results of last month’s election, the opposition’s main concern about the results came after Hernandez began to pull ahead after an hours-long technical problem caused the TSE system to “go down.”

When the system came back the sitting president steadily began to overcome Nasralla’s original five percent lead with over half of ballots counted, which experts had said would be irreversible.

According to Honduran election law, the opposition alliance has a period of 10 days to file appeals against the results.

Mexico, meanwhile, has officially recognised the re-election of Hernandez: an announcement that was brokered in coordination with the United States, according to Reuters.

The presidents of Guatemala, Colombia and Israel have also confirmed their support for the incumbent, much to the dismay of other members of the international community.