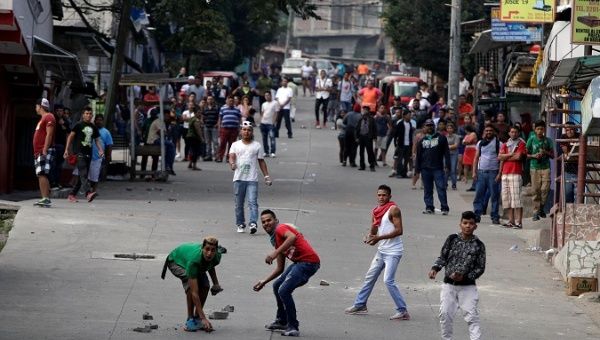 The protests are directed at the probable fraud that has marked the country’s presidential elections and ballot counting process since polls closed Nov. 26. National and international electoral observers registered countless polling irregularities that have left the Central American country without a conclusive presidential winner.

“We declare ourselves ready for a general and permanent mobilization in all regions of the country until the regime that has created a spurious and disgraceful (electoral) fraud is defeated for good,” Zelaya told reporters.

The director of Opposition Alliance added, “on behalf of our supporters, we are ready to forcefully and patriotically make decisions that our country needs to end this dark hour. Until victory, always.”

Demonstrators are blocking streets throughout several cities across the country, La Prensa reported. Roads are blocked and protesters are out in the capital of Tegucigalpa, San Pedro Sula, Puerto Cortes, La Ceiba, Choloma and Choluteca, as well as in the rural department of Olancho.

Military and police forces continue the practice of throwing tear gas into crowds. So far, police and military have killed at least 16 people and wounded over 600 in the several national protests for electoral recounts.

Since the nearly three weeks of electoral limbo began, Nasralla has formally denounced the Supreme Electoral Tribunal, TSE, and its director, David Matamoros, for several counts of electoral fraud. The Opposition Alliance claims Matamoros is “stealing” Nasralla’s “victory” and is working to keep incumbent President Juan Orlando Hernandez from the National Party in power for another term.

International observers from the European Union and the Organization of American States, OAS, have documented numerous irregularities and a lack of transparency throughout the electoral process. Just days after the election, EU observers said the TSE needs to “depoliticize” from the National Party. More recently, they have called for the administration to respect the Honduran rule of law and to respect citizen’s human rights to safely demonstrate.

So far, the EU and OAS have observed the TSE recount of over 30 percent of registered presidential ballots.

The count remains stalled with Hernandez ahead by 1.53 percent in popular votes.