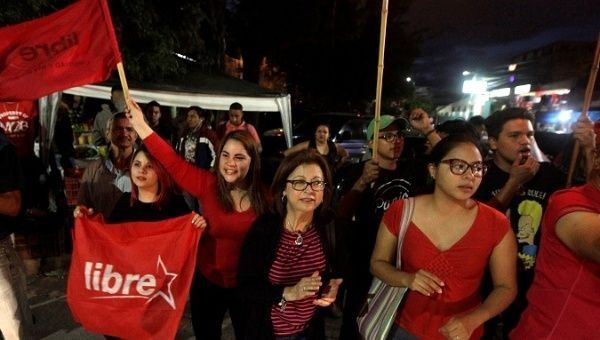 Opposition supporters dance and wave flags during a protest over a contested presidential election with allegations of electoral fraud in Tegucigalpa, Honduras, December 8, 2017. | Photo: Reuters

Just as the 2009 coup in Honduras was a setback for all Latin America, the outcome of the current crisis will have consequences far beyond Honduras.

For seven months in 1969, I hitch-hiked around the US, Mexico and Central America with my best friend from high school. Some class-mates from our school in Vancouver Canada saved their money then travelled to Europe or Australia, but Ollie and I headed south. It was an eye-opening experience for two middle-class Canadians. We had a lot of learning experiences in the US, but today I want to talk about Honduras because it is in crisis as I write this: the Honduran election took place on 26 November, yet the results are still in contention. Will the current right-wing government manage to retain power?

When we visited the capital Tegucigalpa in 1969, we went to the university campus to meet and hang out with young Hondurans. They told us about the recent visit of President Richard Nixon who had taken office a few months before and then travelled to Latin America. The Vietnam war was still raging in 1969, and people protested against the war and Nixon wherever he went. The young Hondurans told us that when Nixon visited Tegucigalpa, there had been a masive protest. Several students who had been protesting from the top of a university building had been shot dead. It made an impression as did the warm and friendly people we met, some living in shacks along the banks of the Choluteca River running through the capital.

In Nicaragua, we heard more eye-opening stories from the youth there. They told us about the Somoza family dictatorship, how corrupt it was, and how they came to power through US Marines. They also told us about the death of Cesar Sandino who fought for Nicaraguan independence but was killed by Somoza’s National Guard in 1934. The Nicaraguan youth told us that when the US asked for proof of Sandino’s death, Somoza shipped Sandino’s head in a box to Washington.

Those and many other experiences changed my life. Over the coming decades, I kept an interest in Central America.

In 1979, when Nicaraguans overthrew the Somoza dictatorship, it seemed like a good thing. But President Ronald Reagan did not like an independent Nicaragua. Violating international law, the US organized a mercenary army called the “Contras” to destabilise and upend the Sandinista government. The mercenaries were trained in Honduras with US funding, supplies and weapons. The US Ambassador to Honduras, John Negroponte, oversaw the mercenary army attacking Nicaragua and the emergence of death squads in El Salvador. Tens of thousands of peasants and opposition activists were killed with impunity. In Honduras itself, there was widespread repression and murder of those challenging the status quo.

In 1998 Honduras was hit by Hurricane Mitch. The second worst Atlantic hurricane ever recorded caused huge destruction and death, especially in poor communities with weak infrastructure. The shacks and modest dwellings along the river bank in Tegucigalpa were all ripped and washed away. Over 7,000 Hondurans died, including people we had met three decades before.

Six years later, in 2004, I was again reminded of the US role in Honduras when the same John Negroponte who had overseen the Contra operations went to Baghdad to take over management of the Iraq occupation. Newsweek magazine said he was coming with a new strategy, which they dubbed the “Salvador option”. Over the next year, sectarian death squads emerged to provoke sectarian bloodshed. Negroponte’s right-hand man in Iraq,  Robert S. Ford, was later appointed as US Ambassador to Syria in 2010 where he helped fuel the uprisings in that country. Thus there is a direct connection between U.S.interference and aggression in Central America and the Middle East.

For decades Honduras was alternately ruled by two political parties representing different branches of their oligarchy. They traded power back and forth, efficiently preventing alternative perspectives.

But things began to change in Honduras in 2006. President Manuel Zelaya came from the oligarchy but started to initiate changes benefiting the poor. He called for real land reform, raising the minimum wage and he questioned the need for US military bases. That was too much. In June 2009 President Zelaya was kidnapped in the middle of the night and flown from the capital to the US military airbase called Soto Cano, only 48 miles away. Hillary Clinton had been in Honduras just weeks before. She disapproved of Zelaya and his policies. The coup went ahead.

After the 2009 coup, conditions in Honduras deteriorated rapidly. Tegucigalpa became the homicide capital of the world. Tens of thousands of youth have fled the country as it has been wracked by drug wars, corruption, and police or paramilitary repression. Alongside this, there has been widespread popular resistance.

In 2011, I returned to Honduras to see the conditions first hand. With a delegation organized by Alliance for Global Justice and Task Force on the Americas, I visited peasants in the fertile Aguan Valley, indigenous communities in the mountains and workers and church activists in Tegucigalpa and San Pedro Sula. We talked with a hard-working activist named Berta Caceres and others in her indigenous organization COPINH. We learned that these communities were still actively resisting the coup and forming a new political party to challenge the right wing coup government not with guns but with votes. In 2015 Berta Caceres was recognized internationally with a prestigious award yet she was murdered in her home last year.

Since then social and economic conditions have not changed. The Hernandez regime governs to the benefit of rich Hondurans and international corporations. He has a strong military alliance with the US military and is very friendly with President Trump’s Chief of Staff General Kelly.

That has set the stage for the most recent events. Days before the election The Economist ran an article describing a National Party training session in cheating techniques. The election was held on Sunday 26 November. On election night, with 57% of the votes counted, the opposition challenger was ahead by over 5%. Then strange things began to happen. The election commission stopped updating the vote tally for 36 hours. On Monday the head of the Supreme Electoral Tribunal said they were still missing 6,000 tally sheets from different polling places. A few hours later, he said they were missing 7500 tally sheets. When they resumed on Tuesday, suddenly the existing President Hernandez was gaining votes, cutting the opposition lead and then winning. It all looks very fishy, even to the OAS monitors.

The situation is rapidly coming to a head. At this moment it is not known what will happen. Initially, the opposition demanded a full and complete review of all the 18,000 tally sheets. Now they are calling for the annulment of the election and a new election under international supervision.

The Honduran government is either stonewalling or is paralysed. Hundreds of thousands of Hondurans have protested in the streets, with over twelve protesters killed. However, in a dramatic change, the elite para-military COBRA security forces have started to refuse orders, saying their job is not to repress their own communities.

Just as the 2009 coup in Honduras was a setback for all Latin America, the outcome of the current crisis will have consequences far beyond Honduras. As clearly articulated in this article, “The US has a lot riding on the Honduran election”, the US foreign policy establishment wants the continuation of the government of Juan Orlando Hernandez (JOH).

Despite all the indications of electoral malfeasance and human rights abuses, the Trump Administration has praised the JOH government. Meanwhile, North American reporters, analysts and activists are doing what they can to support Honduran popular forces and stop the theft of the Honduran election. The coming days may be momentous.  I have explained why it matters to me. But this is more important than a personal connection. It should matter to anyone concerned with progress, justice, respect and international law.
Rick Sterling is an investigative journalist and currently president of the board of Task Force on the Americas. He can be reached at rsterling1@gmail.com.