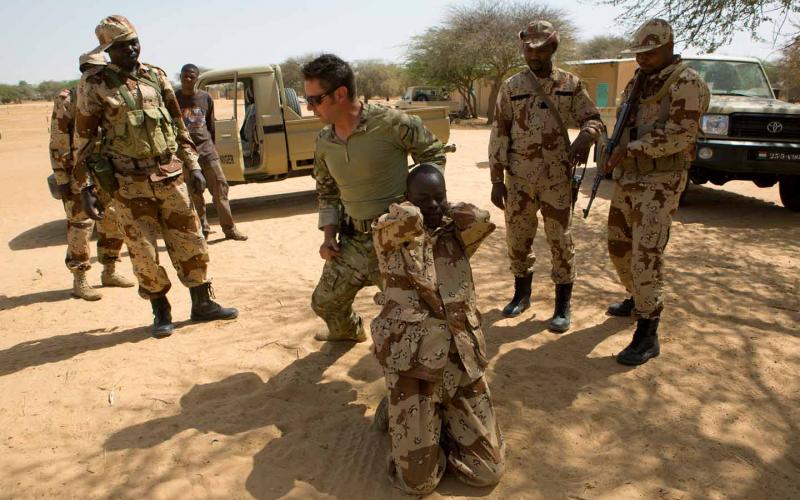 Between 2006 and 2010 the deployment of US special forces troops in Africa increased by 300 per cent. From 2010 to 2017 the numbers of deployed troops exploded by nearly 2000 per cent, occupying more than 60 outposts tasked with carrying out over 100 missions at any given moment across the continent.

The October 4 killings of four US Green Berets in Niger has provided a rare glimpse into the far-reaching American military operations throughout the African continent which have been conducted almost entirely in secret.

Pentagon officials on Friday told reporters that the ambush was carried out by a self-radicalized group supposedly affiliated with ISIS. The Pentagon additionally admitted that at least 29 patrols similar to the one that was fatally ambushed have been carried out by American soldiers in Niger.

According to AFRICOM, the US military command based in Stuttgart, Germany, the US special forces deployed to Niger are tasked with providing training, logistics, and intelligence to assist the Nigerien military in fighting militants affiliated with Al-Qaeda in Mali and Boko Haram in neighboring Nigeria. AFRICOM has officially stated that its forces interact with the Nigerien army in a “non-combat advisory” capacity.

The circumstances surrounding the ambush which resulted in the deaths of the four Green Berets expose AFRICOM’s claim of non-engagement as a lie. The killings occurred during a joint patrol of elite American soldiers and Nigerien forces in a remote hostile region on the border with Mali known for frequent raids conducted by Islamist militants. Some 800 US commandos are deployed to bases in Niamey and Agadez making quite clear the offensive role that the American military is playing in Niger.

Underlining the incident is Niger’s configuration in Washington’s imperialist offensive across Africa. The expanding levels of US military forces arrayed across the continent have increasingly taken on the character of an occupying army. According to the Pentagon, there are a total of 1,000 American troops in the vicinity of the Lake Chad Basin which includes eastern Niger, Chad, northern Nigeria and part of the Central African Republic. An additional 300 troops are stationed to the south in Cameroon.

After its establishment in 2008 as an independent command, AFRICOM has significantly expanded American military influence and troop deployments on the African continent. Measuring the breadth of US military expansion is the construction of a $100 million base in Agadez in central Niger, from which the US Air Force conducts regular surveillance drone flights across the Sahel region.

Augmenting the special forces contingent in the region are military personnel stationed at several dozen bases and outposts including a US base in Garoua, Cameroon.

The special operations units in Africa have their genesis in 1980, after the Pentagon created Special Operations Command (SOCOM) to conduct a raid on the US embassy in Tehran, Iran, to rescue American hostages. Over the years, SOCOM has vastly broadened its scope, and currently has forces stationed on every continent around the globe.

Made up of various units of the US military, including Green Berets, Delta Force, and Navy Seals, SOCOM carry out a broad spectrum of offensive operations including assassinations, counter-terrorism, reconnaissance, psychological operations, and foreign troop training. Under AFRICOM, these forces form a subgroup of SOCOM designated as Special Operations Command in Africa (SOCAFRICA).

Between 2006 and 2010 the deployment of US special forces troops in Africa increased 300 per cent. However, from 2010 to 2017 the numbers of deployed troops exploded by nearly 2000 per cent, occupying more than 60 outposts tasked with carrying out over 100 missions at any given moment across the continent.

The scale of the military expansion which began in earnest under the Obama administration is part of a renewed “scramble for Africa”, comprised of a reckless drive for economic dominance over Africa’s vast economic resources which threatens to transform the entire continent into a battlefield.

The immediate roots of the Niger ambush can be traced to the 2011 US/NATO war in Libya which resulted in the removal and assassination of Libya’s leader Muammar Gaddafi. Under the Obama administration, Washington cultivated and armed various Islamist militant groups with ties to Al-Qaeda as a proxy force to carry out its aim of regime change. The resulting US/NATO bombardment left Libyan society in shambles, and the Islamist fighters spilled forth and out across North Africa and south to the Sahel.

In 2012, as a consequence of a US and French backed coup against the government in Bamako, Tuareg rebels in northern Mali took advantage of the chaos resulting from the coup to stage a rebellion. After the Tuareg militants began taking control over cities and territory as it cut deeper into southern Mali, France with the Obama administrations backing deployed 4,000 troops to the country to neutralize the Tuareg rebels, eventually stabilizing the government it placed in Bamako.

While the Tuareg rebellion may have been halted by the US-backed French offensive, Islamist fighters from Libya were pouring into Mali, with many taking up arms against the Western backed puppet government. The Islamist fighters largely united into one large group, declaring allegiance to Al-Qaeda in the Islamic Maghreb (AQIM). The military forces of Niger and Chad which participated in the US/French intervention in Mali have become frequent targets by the Islamist militants who began conducting cross-border raids and launched attacks on patrols and garrisons.

The rise of these warring Islamist militias which have transformed West Africa into a battlefield is the end result of Washington’s decades-long strategy in cultivating these forces as a proxy army in its wars for regime change, at first, in the Middle East and Afghanistan, and subsequently in Africa.

Underscoring France’s military deployment are the French economic interests it seeks to protect not only Mali, but throughout West Africa, the region which was once part of its colonial empire. In Niger, the French energy giant Areva has established mining operations extracting the country’s rich uranium resources.

For its part, Washington has enlisted the participation of the military forces of Burkina Faso, Cameroon, Nigeria, Niger, Chad, and Mali in its drive for dominance of the Sahel and West Africa, with all of these countries featuring US outposts or bases.

A key element of Washington’s military expansion in the region is the significant economic resources that it aims to secure for American corporate interests. On behalf of these interests, and complementary to its military operation, Washington has constructed a $300 million embassy in Niamey.

Washington’s military interventions in Africa must also be seen as an effort to offset China’s growing economic influence on the continent. Beijing in recent years has secured investment deals with African governments in nearly every sector of Africa’s economy.

China National Petroleum Company (CNPC) purchased the permit for oil drilling in Niger’s Agadem Basin, and CNPC also constructed and operates the Soraz refinery near Zinder, Niger’s second largest city. Deals by Beijing for the construction of pipelines traversing through Chad, Niger, Burkina Faso, and Cameroon are currently in the development stage, causing no small amount of consternation in Washington.

This article first appeared in the World Socialist Website.

* BROUGHT TO YOU BY PAMBAZUKA NEWS

* Please do not take Pambazuka for granted! Become a Friend of Pambazuka and make a donation NOW to help keep Pambazuka FREE and INDEPENDENT!

3 thoughts on “Why is the US at war in West Africa?”