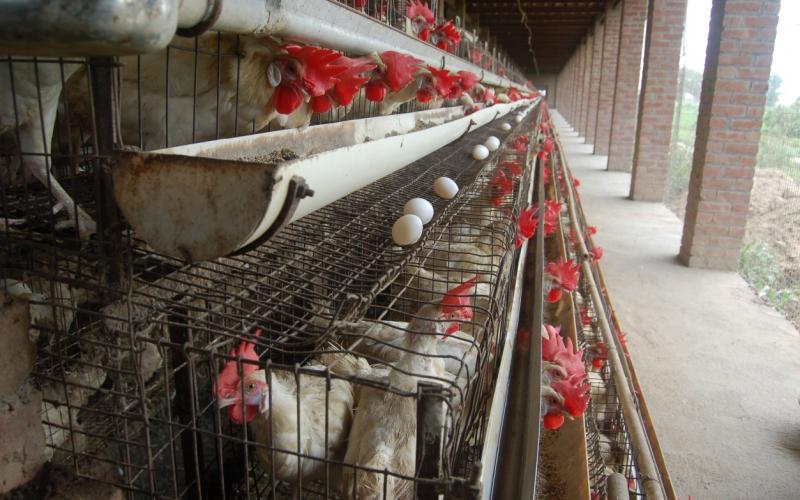 On 23 May 2017 Tedros Adhanom Ghebreyesus of Ethiopia was elected WHO Director-General. In a letter released a head of the election, over 200 scientists, policy experts and others concerned persons are urging the new Director-General to recognize and address factory farming as a growing public health challenge. Just as the WHO has bravely confronted companies that harm human health by peddling tobacco and sugar-sweetened beverages, it must not waver in advocating for the regulation of industrial animal farming.

Unprecedented and rising levels of industrial animal farming are undermining the highest attainable standard of health that is WHO’s mandate. During the 2016 World Health Assembly, Director-General Margaret Chan highlightedclimate change, antibiotic resistance, and chronic diseases as “slow-motion disasters.” However, their fundamental link to industrial animal farming has continued to be disregarded.

The consumption of meat and other animal products is part of most cultures, yet large-scale industrial animal farming has gone beyond satisfying dietary needs and cultural practices. The extent to which we now produce and consume animal products is harming our health.

Industrial approaches to animal agriculture have spread across many nations and are rapidly increasing in low- and middle-income countries. Factory farms (also known as concentrated animal feeding operations, or CAFOs) use intensive methods to rear poultry, pigs, and cattle on a large scale for food products. Practices such as the indiscriminate use of antibiotics, close confinement of animals, and unsustainably large scale of production have become the industry standard, and each has grave consequences for human health. The problem, however, is getting worse as a rising proportion of global meat consumption comes from factory farms. Factory farms produce 67% of poultry meat, 50% of eggs, and 42% of pork globally. A return to more traditional husbandry methods is unlikely to occur, as the prevalence of factory farming has been rapidly increasing in both the high- and low- and middle-income countries.

Although many previous attempts to tackle factory farming have been largely framed around animal welfare or environmental concerns, we believe that limiting the size and adverse practices of factory farming is also central to improving global health.

Antibiotic resistance is a major threat to global health. Seven hundred thousand people die from antimicrobial-resistant diseases each year. If current trends continue, diseases caused by drug-resistant microbes could kill up to 9.5 million per year by 2050, more than current cancer-deaths. While quantification of specific morbidity and mortality burdens attributable to industrial agriculture is currently not possible, an increasing body of evidence suggests that antibiotic use in factory farming is a major contributor to resistance. Many industrial farms use low doses of antibiotics to marginally speed growth or prevent diseases in healthy chickens, pigs, and cattle, but do not bear the societal cost of antibiotic overuse. Although factory farms use antibiotics with the aim of keeping animals healthy and to increase productivity, accumulating evidence suggests that growth-promotion uses do not achieve this purpose and alternatives to antibiotic use for disease prevention such as better husbandry practices and vaccines are available and have been used with success.

Total consumption of antibiotics in animal food production is projected to grow by almost 70% between 2010 and 2030. According to the WHO, two of the three most commonly used classes of antibiotics in U.S. animal farming—penicillins and tetracyclines—are of critical importance to humans. Practices such as the constant low dosing of antibiotics and environmental pollution through animal waste make industrial animal farms the perfect breeding ground for antibiotic resistance by allowing transmission into the environment and nearby community. Several studies have found that the presence of antibiotic-resistant bacteria in livestock is closely associated with their presence in humans, and that decreases in antibiotic resistance have followed reductions in the usage of antibiotics in animals raised for food and humans. The farming of fish in aquaculture poses similar health risks. Currently, in the EU and the US, over 75% of all antibiotics are used in agriculture, while BRICS countries are projected to experience a 99% growth in antimicrobial consumption by 2030, largely due to the continued growth of factory farming. Low- and middle-income countries (LMICs) are estimated to experience rapid growth of both factory farming and antibiotic consumption through agriculture, in part because they may lack the regulatory oversight and veterinary medical workforce that high-income countries have. The consequences of antibiotic resistance will likely be more severe in LMICs because of higher bacterial disease burden and the challenges patients face in accessing expensive second and third line antibiotics. Moreover, antibiotic resistance places a great burden on health systems, leaving weak health systems ill-prepared to deal with increases in resistance.

Climate change is projected to decrease global prosperity and increase wealth inequalities. It is also expected to cause an additional 250,000 deaths each year between 2030 and 2050. As the global health community acknowledges the intertwined nature of planetary and human health, it must also confront the role that factory farming plays in climate change. Experts predict that without rapid and drastic shifts in meat production, agriculture will consume half the world’s carbon budget necessary for keeping global temperature rises under 2° Celsius by 2050. Importantly, this contribution to climate change is not due solely to the emissions from raising livestock – animal farming is also a large contributor because of the deforestation that must occur to supply grazing land for cattle and to grow crop feed. The World Bank estimates that between 1970 and 2004, 91% of cleared land in the Amazon has been converted to cattle ranching. Furthermore, factory farming is not only linked to macro-level environmental crises such as climate change, but one of the largest contributors to localized environmental problems like air and water pollution, as well as land and soil degradation. Although it is difficult to predict the multitude of harms that may spill over from livestock production, evidence suggests this deforestation may also be linked to emerging pathogens, an unexpected channel by which animal farming may contribute to the risk of disease pandemics beyond antibiotic resistance. A large proportion of emerging diseases stem from human-animal interaction in the wild, a process that deforestation accelerates. Zoonotic diseases can also emerge from animals in contact with workers in factory farms themselves.

Lastly, the rise of obesity and noncommunicable diseases (NCDs) can be partly attributed to the dramatic dietary changes made possible by factory farming. WHO has classified processed meat as carcinogenic and red meat as probably carcinogenic. High meat consumption has been shown to increase risks for several types of cancer, stroke,obesity, cardiovascular mortality, lung disease and diabetes. The Institute for Health Metrics and Evaluation estimates that diets high in processed meat and red meat contributed to over half a million human deaths (or over 16 million disability-adjusted life years, or DALYs) in 2015 – more deaths worldwide than interpersonal violence, and a similar DALY burden to breast cancer or alcohol use disorders. The declining cost of meat and its increasing prevalence in LMICs, facilitated by factory farms, contributes significantly to the rapidly rising burden of NCDs.

The harms caused by large-scale, industrial animal farming are global in nature and felt beyond those who consume meat, dairy, and eggs. Climate change does not recognize borders and neither do drug-resistant infectious diseases. Although they contribute least to the global burden of animal farming, the world’s poorest countries are also the most vulnerable to rising water levels, natural disasters caused by climate change, food insecurity, and infectious diseases. Finding solutions to problems posed by industrial animal farms and shifting us toward more healthful agriculture will therefore require the global leadership of WHO.

Just as the WHO has bravely confronted companies that harm human health by peddling tobacco and sugar-sweetened beverages, it must not waver in advocating for the regulation of industrial animal farming.

We applaud the WHO’s important actions on consumer product industries that jeopardize the right of all people to the highest standard of health. In particular, we recognize the significance of the Framework Convention for Tobacco Control, the inclusion of tobacco reduction in the United Nations Sustainable Development Goals, and WHO’s recommendation on sugar consumption.

We call on academics and researchers to apply their energy to document and publicize the harms of industrial animal farming to human, animal, and planetary health.

Finally, we call on the next WHO-Director General to provide global leadership to support all member states in finding sustainable alternatives to the rapid growth of industrial animal farming and help shift us toward farming methods that protect public health and the environment.

In order to lead us down the path of agricultural production that is better for people’s health than our current industrial animal production system, the WHO should:

GBD 2015 Risk Factors Collaborators. 2016. “Global, Regional, and National Comparative Risk Assessment of 79 Behavioural, Environmental and Occupational, and Metabolic Risks or Clusters of Risks in 188 Countries, 1990–2015: A Systematic Analysis for the Global Burden of Disease Study 2015.” The Lancet 388: 1659–1724.

O’Neill, J. (2015). Antimicrobials in agriculture and the environment: reducing unnecessary use and waste. The review on antimicrobial resistance.

Rischkowsky, B., & Pilling, D. (2007). The state of the world’s animal genetic resources for food and agriculture. Food & Agriculture Org.

Rouhani, M. H., A. Salehi-Abargouei, P. J. Surkan, and L. Azadbakht. 2014. “Is There a Relationship between Red or Processed Meat Intake and Obesity? A Systematic Review and Meta-Analysis of Observational Studies.” Obesity Reviews: An Official Journal of the International Association for the Study of Obesity 15 (9): 740–48. doi:10.1111/obr.12172.

[THIS ARTICLE IS POSTED HERER FOR NON-PROFIT, NON-COMMERCIAL, EDUCATIONAL PURPOSE]