Many of us may at times have witnessed an irritable exchange between the judge and a lawyer in the court. All of us are human and irritation, anger, frustration and perceived provocations impact rational and balanced thought. However, often the judge may be heard to observe that he never lets exchanges with counsel impact the merits of the case and the interests of the clients involved. This could be due to the image of a judge as a person unaffected by emotions in the discharge of judicial functions. This self-image may make the thought “as a judge I get affected by angry exchanges” intolerable, and the thought gets suppressed and denied at a conscious level. However, the suppression is a bit like sweeping the dirt under the carpet. The suppressed emotions impact the functioning of the mind and the discharge of judicial duties. Almost everyone else can sense ‘Judge saheb naraz ho gaye hain’ (the judge has become angry).

A parallel – and more meaningful – paradigm could be to acknowledge the feelings engendered by the angry exchange and take them on board at the conscious level. Feelings which are suppressed are not amenable to processing and yet continue to impact human actions. Once feelings are in the conscious domain they can be processed by one’s mind. A judge after acknowledging the feelings of irritability may take a sip of water and can think “Maybe it is better not to pass a final order today” or “Maybe I should adjourn this case today” or “Maybe I should recuse myself from this case”. It opens the possibility of conscious choice to reduce the impact of the angry-irritable feeling engendered by the exchange. END_OF_DOCUMENT_TOKEN_TO_BE_REPLACED 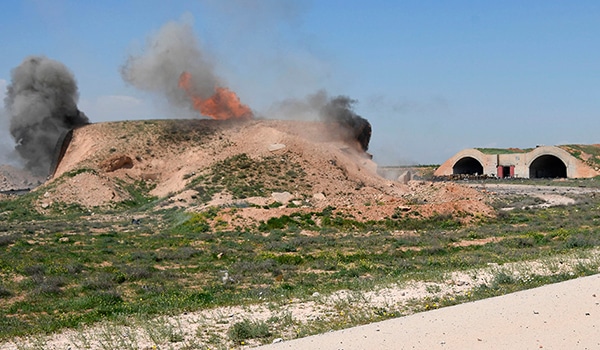 The anti-Russia bandwagon has gained so much momentum that a national frenzy is boosting the odds of unfathomable catastrophe.

Vast efforts to portray Donald Trump as Vladimir Putin’s flunky have given Trump huge incentives to prove otherwise. Last Thursday, he began the process in a big way by ordering a missile attack on Russia’s close ally Syria. In the aftermath of the attack, the cheerleading from U.S. mass media was close to unanimous, and the assault won lots of praise on Capitol Hill. Finally, the protracted and fervent depictions of Trump as a Kremlin tool were getting some tangible results. END_OF_DOCUMENT_TOKEN_TO_BE_REPLACED

END_OF_DOCUMENT_TOKEN_TO_BE_REPLACED

Oscar Schémel, president of one of Venezuela’s most respected independent polling firms, expresses his views of the current political standoff between the Venezuelan government and right-wing opposition, which has seen seven dead as a result of violent anti-government protests demanding the ouster of President Nicolas Maduro.

According to recent studies by Hinterlaces, 76 percent of Venezuelans disapprove of any future international intervention to remove President Nicolas Maduro from power. Eighty-seven percent disapprove of any international military intervention in our country, while 9 out of 10 reject violent protests and the guarimbas [violent anti-government demonstrators who block roads].

Likewise, two out of three Venezuelans have an unfavourable opinion of the Organisation of American States (OAS). END_OF_DOCUMENT_TOKEN_TO_BE_REPLACED

Ernesto Che Guevara (1928-1967) was an Argentine-Cuban revolutionary, statesman, writer and physician. His life, actions and thought have become an example for millions of men and women around the world. Foto: Osvaldo Salas

ERNESTO Guevara de la Serna (1928-1967), the mythical Che, is such a fascinating historical figure that there have been numerous filmmakers who have wanted to explore his intense life, either through documentaries or feature-length films.

Below we make reference to ten examples from the extensive filmography seeking to portray this man/legend, one of the most important Latin American figures of the twentieth century. END_OF_DOCUMENT_TOKEN_TO_BE_REPLACED