What on earth is going on in Venezuela?

Since yesterday, the international media has been ablaze with the news that Venezuela’s National Assembly – one of the five fundamental branches of the state – has been dissolved, quite literally overnight. De facto making Venezuela, well, a dictatorship, according to the mainstream press.

But is it true that the country’s legislative branch has been eliminated in one fell swoop? The short answer is no, not quite.

As usual, there is a grand canyon sized gap between what is being reported in the corporate press and the reality on the ground. Luckily VA is here to clear that up. So let’s start with the facts.

END_OF_DOCUMENT_TOKEN_TO_BE_REPLACED 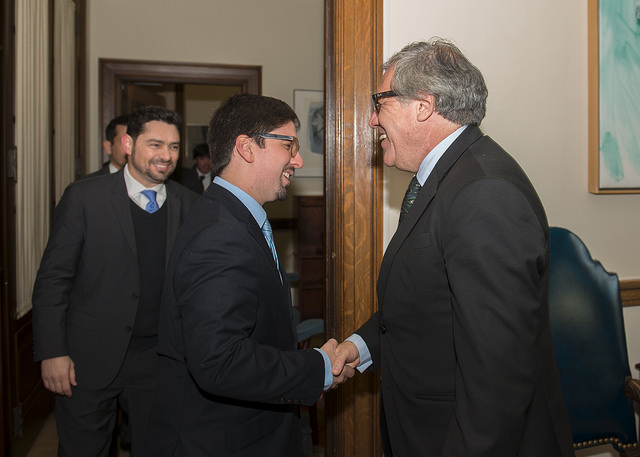 “There’s been a coup in Venezuela! Maduro has carried out a power-grab!” Just a few days before the 15th anniversary of the short lived coup against the democratically elected president Chavez (11-13 April, 2002), those who carried out that coup (the Venezuelan oligarchy, their masters in Washington and its lapdogs in Buenos Aires, Brasilia, Santiago de Chile and Lima, cheered on by the media wolf pack in Madrid and the US) are now shouting and screaming like hyenas against an alleged “self coup” by president Maduro.

END_OF_DOCUMENT_TOKEN_TO_BE_REPLACED

Protests took place in cities across the United States and beyond on Friday to denounce President Donald Trump’s missile strikes on Syria.

The strikes on a Syrian air base—launched without congressional approval or U.N. authorization—were said to be in retaliation for Tuesday’s chemical weapons attack against Syrian civilians, though there has not yet been an independent investigation showing that the chemical attack was, as the U.S. claims, ordered by President Bashar al-Assad. END_OF_DOCUMENT_TOKEN_TO_BE_REPLACED

This year’s mass bleaching occurred even in the absence of an El Niño event. (Photo: Ryan McMinds/flickr/cc)

The Great Barrier Reef may be at a “terminal” point after being hit with unprecedented bleaching events in consecutive years, scientists warned Monday.

According to new aerial surveys conducted by the Australian Research Council’s Centre of Excellence for Coral Reef Studies, two-thirds of the reef have now been affected, up from one-third last year. This year’s mass bleaching occurred even in the absence of an El Niño event. END_OF_DOCUMENT_TOKEN_TO_BE_REPLACED

He was born 100 years ago in British India on 10th October 1916, in a cultured middle-class family of Bagbazar (Bishwakosh Lane), his father and grandfather, born in East Bengal, were professors. In 1916, Kolkata ceased to be the capital of British India. Delhi wrested the glory in 1911. The British afterglow was still very bright in the city, as it harked back to the commercial ethos that Job Cbarnock endowed it in 1692. His mother died in 1928, when he was 12; three years later his father remarried to his shock. A literary atmosphere prevailed in their home in Bagbazar, with Rabindrapath’s influence being the strongest. Rabindranath wrote to him 14 letters, the last on 20th August 1930. To grandfather, Prof Dinesh Chandra Sen, writer, collector of Bengali folklore and chronicler of Bengali literature, the poet wrote 56 letters across 41 years. END_OF_DOCUMENT_TOKEN_TO_BE_REPLACED Once a prime national centre of historical research, ICHR has been totally handed over to the RSS pracharaks. It is nobody’s argument that RSS cadres have no right to influence research in Indian history. But as George Orwell in his masterpiece NINETEEN EIGHTY-FOUR (1949) wrote, it should not be left to the whims of a section of the sectarian ruling elite which specializes in daily changing historic records to fit its polarizing propaganda goals of the day. The deliberations at recently concluded 3-day (8-10 February, 2017) national seminar on Subhash Chandra Bose and Indian National Army (INA) organized by ICHR show that even George Orwell and practitioners of post-truth dictum would be embarrassed by reliance on sheer false-hood by the RSS historians and leaders invited for the seminar. END_OF_DOCUMENT_TOKEN_TO_BE_REPLACED