[This article is a revised version of an earlier essay by the same title, published online in Jacobin on November 28, 2016, to mark the 196th anniversary of Engels’s birth.] 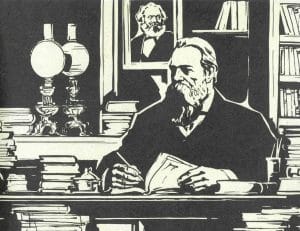 Few political and intellectual partnerships can rival that of Karl Marx and Frederick Engels. They not only famously wrote The Communist Manifesto in 1848, both taking part in the social revolutions of that year, but also two earlier works—The Holy Family in 1845 and The German Ideology in 1846.

In the late 1870s, when the two scientific socialists were finally able to live in close proximity and to confer with each other every day, they would often pace up and down in Marx’s study, each on their own side of the room, boring grooves in the floor as they turned on their heels, while discussing their various ideas, plans, and projects. They frequently read to each other passages from their works in progress.1 Engels read the entire manuscript of his Anti-Dühring (to which Marx contributed a chapter) to Marx before its publication. Marx wrote an introduction to Engels’s Socialism: Utopian and Scientific. After Marx death in 1883, Engels prepared volumes two and three of Capital for publication from the drafts his friend had left behind. If Engels, as he was the first to admit, stood in Marx’s shadow, he was nevertheless an intellectual and political giant in his own right. END_OF_DOCUMENT_TOKEN_TO_BE_REPLACED

“We need somebody who is prepared to confront the system, not someone who is part of the system,” said Sen. Bernie Sanders (I-Vt.) (Photo: Public Citizen/Twitter)

Clayton, a corporate lawyer who helped Wall Street defy regulators and get billions of dollars in government bailout funds during the financial crisis, is “the embodiment of the greed that nearly destroyed the economy,” Sanders charged in his fiery speech. END_OF_DOCUMENT_TOKEN_TO_BE_REPLACED

The coal industry is in “freefall” worldwide, the latest annual survey from environmental groups Sierra Club, Greenpeace, and CoalSwarm finds.

“The staggering uptick in clean energy and reduction in the new coal plant pipeline is even more proof that coal isn’t just bad for public health and the environment—it’s bad for the bottom line,” said Nicole Ghio, senior campaigner for the Sierra Club’s International Climate and Energy Campaign, in a statement. “Markets are demanding clean energy, and no amount of rhetoric from [President] Donald Trump will be able to stop the fall of coal in the U.S. and across the globe.”

END_OF_DOCUMENT_TOKEN_TO_BE_REPLACED

Mexico’s Foreign Minister, Luis Videgaray, said the U.S. must take responsibility for much of the violence which fuels Central American migration.

Speaking Thursday at a banking conference in Acapulco, Mexico, Videgaray said that the U.S. is the main source of arms and money for the drug cartel violence in the so-called Northern Triangle — comprising El Salvador, Honduras and Guatemala — which has forced thousands to flee northwards. END_OF_DOCUMENT_TOKEN_TO_BE_REPLACED

Archive photo of anti-Pinochet protesters during a march outside of the country’s Supreme Court in Santiago de Chile. | Photo: EFE

Chile’s Supreme court sentenced 33 former intelligence agents of Augusto Pinochet dictatorship for the enforced disappearances of five communist activists in 1987 who were kidnapped, drugged and dumped out to sea.

The court sentenced the defendants to between three and 15 years in prison for the abduction and disappearance of the five members of the Manuel Rodriguez Patriot Front, the militant wing of the country’s Communist Party.

The longest sentences were given to the former head of the National Information Center, General Hugo Salas Wenzel, and Major Alvaro Corbalan Castilla, both of whom will spend 15 years behind bars.

END_OF_DOCUMENT_TOKEN_TO_BE_REPLACED

Cuba’s Ministry of Public Health announced Wednesday the opening of a professional training center for the use of robotics in medical treatment.

Cuban doctors lauded the opening of the center, given that it is virtually impossible for the socialist island to acquire the latest technology in this field. The only firm that sells necessary equipment for robotic surgery is based in the U.S., preventing Cuba from purchasing them because of the United States’ illegal blockade. END_OF_DOCUMENT_TOKEN_TO_BE_REPLACED

The NDA Government promised in the budget last year to double the incomes of the farmers by 2020. There was no improvement in the incomes of the farmers, however. Now, it has again promised to do the same by 2022 in the budget for 2017-18. This promise will meet the same fate as the previous one because the Government refuses to even recognize, let alone solve the basic problem of the farmers. The intention of the Government may be good but the policies are straightforward bad.  END_OF_DOCUMENT_TOKEN_TO_BE_REPLACED