The following timeline of the Great Proletarian Revolution in Russia in 1917 is compiled by Journal of People on the occasion of the hundred years of the Revolution. The timeline presents only a few of the major incidents of the revolution in the month of February, and is part of a full timeline. A part of the timeline has been posted in Journal of People in January. The present timeline for February will be followed by other parts in the coming months:

From January 1 through February 22: (the day before the revolution began), 260 strikes participated by 320,517 workers, which was an average of 5.6 a day, and the distinction between economic and political strikes broke down within a short time.
February 10: The Councillor of State Mikhail Rodzianko meets Tsar Nicholas II in Tsarskoye Selo. Rodzianko warns the Tsar him of massive upheaval throughout the country. Rodzianko insists that tumultuous events can be avoided by stregthening the Duma. The Tsar ignores the advice. END_OF_DOCUMENT_TOKEN_TO_BE_REPLACED

“Despite our coming from different places the camaraderie among all of us was stupendous. We had passionate talks about everything,” said Almudéver. | Photo: Denis Rogatyuk / EFE

Now 97, the anti-fascist veteran looks at the battles he fought during the Spanish Civil War and the global fight against the right wing today.

Born in France of parents from Spain’s Valencia region, José Almudéver, a 97-year-old veteran of the Spanish Republican Army and the International Brigades, has always been a staunch defender of the historic memory of the Spanish Republic that lasted from 1931 to 1939. He has also always been a harsh critic of the 1936 Non-Intervention Pact signed by all major Western European powers with the express goal of preventing military support reaching the contending sides in the Spanish Civil War (1936-39).

END_OF_DOCUMENT_TOKEN_TO_BE_REPLACED

By TASSOS TSAKIROGLOU AND MARTA HARNECKER

The following interview withMarta Harnecker was conducted by journalist Tassos Tsakiroglou for the Greek newspaper Efimerida ton Syntakton prior to Harnecker’s participation in the international conference “150 years Karl Marx’sCapital: Reflections for the 21st Century”, held in Athens, Greece, January 14-15, 2017. Links is making available the original English version of the interview.

You are coming to Greece for a Conference on the actuality of Marx’s theoretical system. In the midst of a severe international financial crisis, what lessons can we draw from Marx’s critique of political economy?

I believe it is incredible how Marx anticipated what would happen in the world in regards to the development of the capitalist mode of production. To name only a few things: he announced the tendency to concentrate more and more in less hands (look at transnationals today), the conscious technical application of science to the process of production in general and especially to the exploitation of soil (look at robotic and transgenic agriculture), the entanglement of all peoples in the net of the world market, and, with this, the growth of the international character of the capitalist regime (look at globalization), and so on. He could foresee all this because he was capable of discovering the logic of capital and, in doing so, he was looking to provide workers with the theoretical instruments for their liberation.

END_OF_DOCUMENT_TOKEN_TO_BE_REPLACED

WASHINGTON – A new report from the Center for Economic and Policy Research (CEPR) looks at key economic and social indicators, as well as policy, institutional, and regulatory changes in Ecuador in the decade since President Rafael Correa took office. The paper also looks at how the government dealt with the 2008–2009 world financial crisis and recession, and then a second oil price collapse beginning in 2014.

“The reforms and macroeconomic policy changes over the past decade, some of which were quite innovative, seem to have allowed for significant economic and social progress ― despite two major external economic shocks that triggered recessions in Ecuador,” said CEPR Co-Director and economist Mark Weisbrot, a coauthor of the paper.

Among the highlights, the paper finds:

The Wall, US border, separating Mexico from the US, looking east, along Highway 2, Sonora Desert, Mexican side (flickr/cc)

President Trump is unlikely to fulfill his dream of forcing Mexico to pay for his proposed wall along the United States’ Southern border.

If it is built, though, U.S. taxpayers will almost certainly foot the bill, which some have estimated could be as high as $50 billion.

END_OF_DOCUMENT_TOKEN_TO_BE_REPLACED

Whistle-blower Edward Snowden has spoken on a report suggesting Vladimir Putin is considering sending him back to the US as a “gift” to President Donald Trump, claiming the story proves he is not a spy.

“Finally: irrefutable evidence that I never cooperated with Russian intel,” Snowden said. “No country trades away spies, as the rest would fear they’re next.”

END_OF_DOCUMENT_TOKEN_TO_BE_REPLACED

The morning of February 10, 1959, newspaper hawkers on the streets shouted at the top of their lungs, “Che, Cuban citizen!” They were referring to a press release printed on the front page of that Tuesday’s edition of the newspaper Revolución, announcing the Foundational Law approved by the Revolutionary Government, in a session which began on February 7 and ended during the dawn hours the following day.

END_OF_DOCUMENT_TOKEN_TO_BE_REPLACED 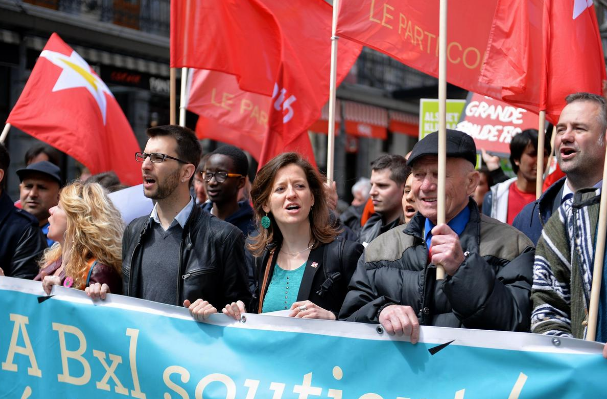 Supporters of the Workers’ Party of Belgium marching in 2015. Prima News

The Workers’ Party of Belgium (PTB) has seen surprising gains in recent months. Long marginalized electorally as a fringe Marxist organization, the PTB is now the third-largest political force in the French-speaking region of Wallonia, with polls giving the party 18 percent of voter support in the region, plus 10 percent in Brussels, Belgium’s capital.
With the 2019 federal elections approaching, the PTB aims to turn these results into a durable presence in Belgian politics.

Founded in 1979, the PTB entered the federal parliament for the first time in 2014 with two MPs, and has been working from the opposition to the current right-wing coalition in power in Belgium.

Peter Mertens, president of the party, sat down with Mario Cuenda García, a blogger and PPE student at the University of Warwick, and Tommaso Segantini, an independent freelance journalist who’s written for the New Arab, openDemocracy, and Telesur to discuss, among other topics, the prospects of the PTB in Belgium, its position on Europe, and the CETA affair of recent months.

Mertens stresses the need to create a counter-hegemonic bloc to the far right through a constant “presence of the ground” and a “strong anti-establishment discourse,” along with the creation of a transnational alliance of radical left-wing forces in Europe to provide an alternative to both the current policies of the European Union and rising nationalist forces. END_OF_DOCUMENT_TOKEN_TO_BE_REPLACED