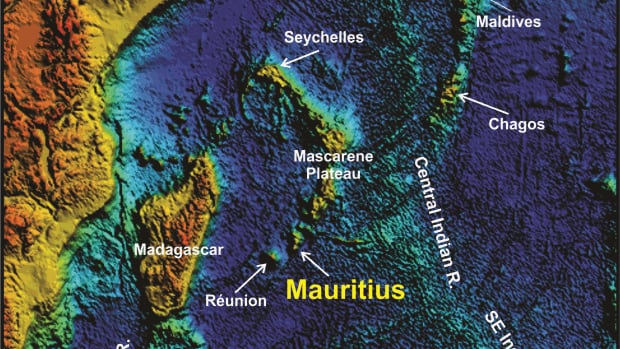 One lost continent, hiding underneath a tropical holiday destination, has been found by scientists.
Deep at the bottom of the Indian Ocean, a team of scientists, led by South Africa’s University of the Witwatersrand, has found pieces of the lost, ancient continent.
The lava-covered piece of continent, dubbed ‘Mauritia,’ was found under the island of Mauritius. According to the report published this week in the journal Nature Communications, the piece of crust is left over from the breakup of Gondwanaland, a super-continent that existed more than 200 million years ago.
More than 500 million years ago, all the land in the world was made up of two supercontinents, Gondwana in the southern hemisphere and Laurasia in the north. The two supercontinents briefly combined to form Pangaea before breaking up into the continents we know today. Gondwana split up and became South America, Africa, Antarctica, Australia, and the Indian portion of Asia, as well as a number of smaller islands in the Atlantic, Pacific, and Indian Oceans.
But it turns out, that’s not the complete picture. New evidence collected by scientists from Wisz University and the German Research Centre for Geosciences shows that there was another continent adrift in the Indian Ocean, but most of it sank beneath the waves.
Professor Lewis Ashwal, lead author of the related paper, said there are a number of pieces of “undiscovered continent” of various sizes spread over the Indian Ocean, left over by the breakup.
“This breakup did not involve a simple splitting of the ancient super-continent of Gondwana,” says Ashwal, but “a complex splintering took place with fragments of continental crust of variable sizes left adrift within the evolving Indian Ocean basin.”
The scientists collected samples of the mineral zircon, which can be used to calculate the age of rocks, from an island off the coast of Madagascar called Mauritius. Most of the island is younger than 9 million years.
The scientists concluded:
The samples were from a part of Gondwana that no longer exists. The ‘lost’ continent was named Mauritia, and the researchers believe that more pieces of the continent can be found on other islands in the area.
This discovery changes the way scientists assume Gondwana fractured into today’s continents around 200 million years ago. Instead of a simple splitting of the supercontinent, the existence of Mauritia proves that Gondwana underwent a much more violent splitting, with many smaller pieces of the landmass left floating, and eventually sinking, into the Indian Ocean.
A Time report headlined “Found: A Lost Continent! (Really)” said:
“Mauritius long drew the attention of geologists and other scientists because of one curious feature: its strong gravitational pull. Earth’s gravity is not completely uniform at all places across the globe, but can be slightly stronger or weaker, depending on the density of the material in the local crust. The moon is dotted by many such “mascons” — or mass concentrations — the remains of heavy metal meteorites that long ago crashed onto the surface and buried themselves where they hit. The Earth has a few too, but it is typically plate tectonics — the constant movement and reformation of the crust — that is responsible.”
The February 2, 2017 datelined report by Jeffrey Kluger said:
“If Mauritius sits atop a mascon, it was likely a result of crustal motion that caused an existing landmass to shatter and sink entirely from view. The island then rose back up to mark the burial site of the lost land like a giant tombstone. That theory was formally advanced by geoscientist Lewis Ashwal of the University of Witwatersrand in Johannesburg, in 2013. In a brand new paper, published in Nature Communications, Ashwal seals the deal with a new study of 13 small grains of zircon.
“Mauritius is a mere eight million years old — babyhood on a geological scale — which means its overall geology should be similarly young. However 2 billion-year-old samples of the mineral zircon have been collected on the island’s beaches. Ashwal and his colleagues collected more samples and used uranium-lead dating techniques, which relies on the concentration of the two elements in the zircon to determine its age, and found the samples were even older — dating back roughly three billion years. The zircon could not have been formed along with the much younger Mauritius; instead, it was likely blown up onto dry land when undersea volcanoes erupted, blasting out much older rocks from subsurface crust.”