A poster of October Revolution.

These words were often repeated by the liberal “educators of the people” long before the October Revolution. They expressed the desire of the Russian bourgeois intellectuals to equip the working people with a knowledge of their past and rouse them to active opposition against the autocratic order of the Romanov tsars. For these autocrats were reluctant to share the “fullness of their power” with the landowners, manufacturers, and bankers. In the states of Western Europe the capitalists had long ago taken over power from the monarchy and made themselves complete masters of the soil and the lives of the people–the same people, of course, through whom they had seized power. END_OF_DOCUMENT_TOKEN_TO_BE_REPLACED 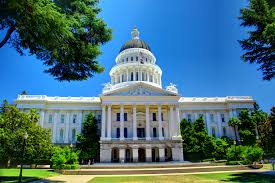 The California State Capitol in Sacramento. Photo via Wikimedia Commons

A recent CNBC.com report said:
“Backers seeking to break California away from the U.S. started collecting signatures Friday to get a proposed independence measure on the 2018 statewide ballot.
“This isn’t the first effort aimed at California secession but leaders say the previous tries were mostly about building awareness of the issue and increasing public support. They say recent polls show more Californians want a divorce from the union and believe that President Donald Trump’s election also has boosted their cause.
“‘We definitely see that there’s some newfound support for this and we want to get the signatures out there, especially now because we’re in the first 100 days of Donald Trump’s presidency when he’s going to be aggressively pursuing his policies that the people of California are going to reject — and have rejected,’ Louis Marinelli, president of the Yes California Independence movement, said in an interview Friday.” END_OF_DOCUMENT_TOKEN_TO_BE_REPLACED

The economic impact of violence and conflict to the global economy was $13.6 trillion in 2015, said a report of the Institute for Economics and Peace (IEP). The figure is equivalent to 13.3 percent of the world GDP or $1,876 PPP per annum, per person. To further break it down, that figure is $5 per person, per day, every day of the year. When one considers that according to the most recent World Bank estimates 10.7% of the world’s population are living on less than $2 per day, it shows an alarming market failure.
The figures in the report are expressed in purchasing power parity (PPP) terms.
The IEP said:
Iraq, Afghanistan and Venezuela are the countries where the impact of violence is more than 40 percent of GDP, and the Syrian economy is the most affected by violence, at 54.1 percent of GDP. Regionally, the cost of violence has surged in the Latin America, the Middle East and North Africa. END_OF_DOCUMENT_TOKEN_TO_BE_REPLACED

Thousands of Cubans participated in the March of the Torches on Saturday, an annual procession that pays homage to national hero Jose Marti on his birthday. Marti was a poet, essayist, novelist, and later in his life, a soldier. END_OF_DOCUMENT_TOKEN_TO_BE_REPLACED

A new study carried out by the National Institute for Agricultural Research (INRA) in the UK and published in the Scientific Reports Journal said:

Toothpastes and a few other food products contain an additive called titanium dioxide, which may cause cancer.

An additive is a substance used in products to improve or preserve it. Titanium dioxide is a naturally occurring oxide of titanium. It is commonly referred to as E171 on the ingredient list and is often used in products like toothpastes, biscuits, chewing gums and sunscreen. END_OF_DOCUMENT_TOKEN_TO_BE_REPLACED

The proliferation and increasing incidence of farmers killing themselves is the most telling illustration of economic non-viability of the current economics of farming. The political leaderships often frivolously approach such a serious malady hitting at the roots of Indian agriculture. The rate of suicide rate is increasing rather than decreasing or remaining stable. The crisis that is structural is sought to be dismissed as non- existent which is nothing but rank irresponsibility and contempt exhibited by the political class of the country. The roots of the crisis are deep with a long history and have become built-in into the socio-economic framework of rural India in its relations to the rest of India and the world. The ongoing crisis in Indian agriculture is in the nature of struggle between producers and their exploiters who are hell bent to extract maximum surplus from crores of the former using the mechanism of the market. This market is not a monolithic one but with different components all of which are unfavorable to the actual producers. The non-viability of agriculture as an economic proposition can hence be rectified only through a restructuring of the market mechanism which in turn necessitates restructuring of the balance of power between classes in society. This is what makes the farmers’ question in India an intrinsic part of the class struggle.  END_OF_DOCUMENT_TOKEN_TO_BE_REPLACED